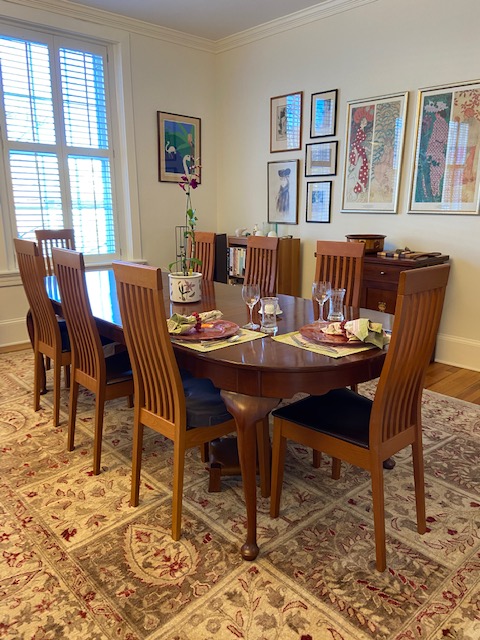 Dad signaled for silence, allowing him to bless all “three venues” with grace. I don’t remember any of the details of my last Thanksgiving Day with my family in St. Louis in 1957. I can, however, provide a sketch of at least the categories of attendees because holiday meals were family rituals, a part of my deepest childhood memories.

Growing up as the ninth of ten children (“next to the baby”) in my black family, a holiday gathering was about bountiful food and contested space that required event planning skills, particularly when it came to seating arrangements. Those present included, at a minimum, my parents, me and my four siblings living at home, and my three oldest siblings living in St. Louis along with their spouses and children. Add in my aunt living in St. Louis, her adult daughter and her grandchildren, as well as my grandmother who was living with us off and on during the fifties and sixties. Between two and three dozen people ranging in age from infancy to mid-seventies would share a sit-down meal by using all the available space of the first floor of our small turn-of-the century house. The centerpiece of this arrangement was the table in the dining room—the “Big Table” —where the adults huddled.

My three middle siblings, ranging in age from sixteen to their early twenties and cousins about the same age congregated at the kitchen table. The rectangular piano bench in the hallway entrance was a sort of feeding station for the preschoolers who filled their plates with finger food before sitting on the bottom step of the stairway leading to the second floor. My younger brother and I, along with nephews and nieces closer to us in age, were assigned to one or more card tables set up in the living room by pushing the coffee table into the couch. The sliding oak doors between the living room and dining room were pushed open, giving us a clear view of the Big Table from what we dubbed our “Little Table.”

While our elders chatted and sipped wine as a prelude to their first bites of food, the conversation at the Little Table centered around whether we would ever reach the Big Table. It was partially a joke about the hierarchy in our family, but also a bit of gallows humor. Someone—my grandmother? —would have to die for a seat to open up at the Big Table. Also, as additional older siblings married, their wives or husbands would join the elders seated at the Big Table.  There was also the possibility, not alluded to by anyone but said only to myself, that some of those siblings might leave St. Louis like one of my brothers who joined the Air Force in 1952 and had just signed on for another four-year stint. The consensus among me, my younger brother and our contemporary nieces and nephews was that we would never move up to the Big Table. In effect, we would never become the elders.

At some level, I must have rejoiced in the notion that I would always be “next to the baby” as epitomized in the seating arrangements at my last Thanksgiving dinner with my complex multigenerational family. Feasting not only on the food, but also on each other’s company through an established family ritual, gave a certain timeliness to the sense of connection I experienced. I removed myself from the family Thanksgiving ritual the next year at fourteen when I accepted a scholarship to attend a New England all boys boarding school, Phillips Exeter Academy. I don’t remember anything about my first New England Thanksgiving with a dormmate’s family in Salem, Massachusetts in 1958, except a visit to “The House of Seven Gables” (the inspiration for Nathaniel Hawthorne’s novel by the same name.)  I spent the Thanksgivings of my sophomore and junior years on campus where faculty and their family members ate at the Faculty Tables and students unable to go home or lacking invitations from classmates living nearby gathered around the student tables for a traditional turkey dinner. My senior year I spent Thanksgiving in New York City with a different classmate’s family. I remember very little about any of the people I joined for this all-American holiday during my four years at boarding school.

But what did my all-male boarding school lack that I had at home even at those crowded and boisterous Thanksgiving Day meals?  Or to use a cliché, was I ever homesick? The problem with looking through the “homesick” lens is that my memory doesn’t work that way. I would rather ask: In what ways did I experience a sense of emotional continuity between my prep school environment and the emotional cradle of my pre-Exeter life? Both Exeter and my family provided many opportunities for male bonding. For example, I am only sixteen months older than my younger brother and just three years older than my oldest nephew.  I also had the good fortune to have deep connections to adult men other than my father— my two eldest brothers and the same male teacher during my middle school years in a gifted and talented program. (He was the person who introduced Exeter’s scholarship program to my patents.) My ability to find among the three white faculty members residing in my dorm two whom I could trust to help me navigate a new environment, built on numerous mentoring sessions with older black men.

Similarly, I became life-long friends with some of my dormmates, teammates, and classmates during my four years at boarding school. The capacity to meet and connect with male peers was built on the foundation of my multifaceted relationships with all my brothers. I wasn’t a 1960s teenager rebelling against authority, especially male authority. Rather I was a small boy in search of adults or older classmates-like-siblings whom I could trust to help me forge my place in the living arrangements—my dorm—where I started out being one of the smallest of freshman and ended up as one of the biggest seniors, and a proctor to the younger members of my dorm.

Looking back, I now realize there were no girls or women in my Exeter world who personified either my mother’s matriarchal authority or her driving ambition for my academic achievement. Given the way in which I processed hurt as a child by instinctively suppressing it, I wonder if I suppressed the hurt my mother’s sometimes harsh “Great Expectations” inflicted on me. I, nonetheless, do not believe being relieved of my mother’s driving ambition on a daily basis hurt me emotionally. I had the freedom, for instance, to take an art course without having to withstand her cross-examination of me about its utility in the college admissions process.

On the other hand, a hurt I might have suppressed during my boarding school days was the lack of opportunities to replicate at Exeter the sisterly affection I enjoyed from my three older sisters. Each in her own way included in their warm acceptance of who I was becoming, honest critiques that improved my character. Although I recall only one serious discussion led by a faculty member about how coeducation might change Exeter, the gist of the discussion was that if girls were ever admitted, they would be our peers in terms of abilities, and thus more like potential sisters than the Playboy Bunnies of our prep school fantasies.

Leaving my family at fourteen in 1958, created fissures in my memory. I have to distinguish those things I actually remember from what I “know” from a quick internet search. Was there at my last Thanksgiving dinner with my family any discussion of the potential violence during the attempt to desegregate Little Rock Central High in fall 1957? Probably so. But I don’t remember it.  What I do remember was the family ritual, a collective or community memory that is the underpinning of my ability to forge new relationships that nourish me wherever I might be.

I pause each Thanksgiving to share a communal meal with my own children or with friends or neighbors I hadn’t met yet when I left home. None of these gatherings ever requires the Little Table and Big Table of my childhood. This Thanksgiving, in the year of COVID-19, I will celebrate my human connections with my best friend and wife, Suzy, around our condo dining room table big enough for eight— “a Big Table for Two”— in Richmond, Virginia.  I won’t “miss” my large family on this holiday because I have memorialized many of them in my writing. I honor the legacy my parents gave me by holding the family rituals in my memory, and in my heart.